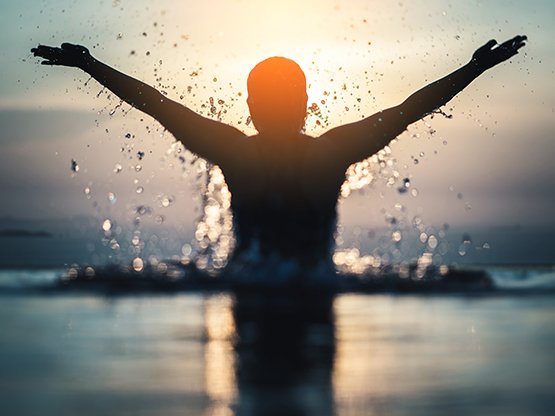 Lottie Rennie was diagnosed with breast cancer aged just 33. Since then, she has navigated through a gruelling treatment regime to continue her successful career as an artist and pursue her love of wild swimming.

In early October 2017 Lottie felt a shooting pain in her left breast. “I found a lump and my heart sank,” she says. She had already made an appointment with her GP because, she explains, “My periods had gone crazy and my hormones were all over the place.” Her doctor sent her to a breast clinic and the following week she met with a consultant. “She said the tumour was 2cm long and that I would need chemotherapy to shrink it, followed by a lumpectomy.”
Lottie was understandably shocked. “I started to cry, but the consultant told me it was a very small lump and it would be a quick procedure. That’s what I thought initially. It wasn’t though – it all changed.”

Because Lottie was so young, a mammogram failed to show her tumour, so she was sent for an MRI scan. “It was a bad day when I went for the MRI results. My breasts were already black and blue because I’d had several biopsies, then they told me the tumour was actually 8.7cm, even though it hadn’t shown on the mammogram. They weren’t sure what type of cancer it was at that point. I remember leaving that room and being lost for words. There just didn’t seem any point to it all. On the way home I envisaged opening the door of the car and jumping out on the motorway. I felt suicidal for about six weeks.” 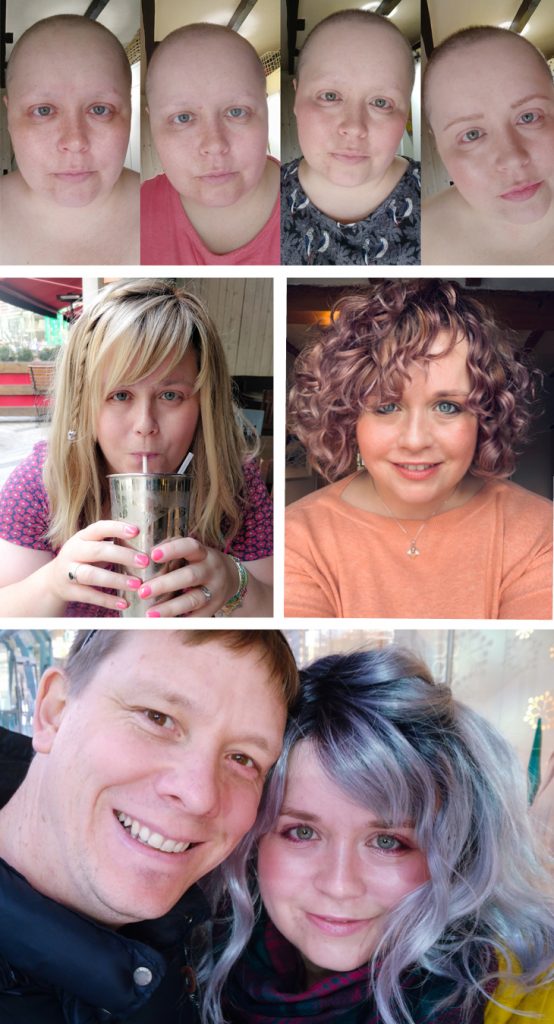 Lottie shaved off her hair three weeks before chemo started and was wearing a blue wig when she went for her first chemo session.

Lottie had six months of intravenous chemotherapy to shrink her tumour. Determined not to let it beat her, she shaved off her hair three weeks before chemo started and was wearing a blue wig when she went for her first session. “A girl came up to me and said ‘You can’t have cancer because you look so good!’ I assured her I did have cancer. She became my chemo buddy from our third session onwards.

“Each time I went, I made sure I dressed up – wig, eyelashes, make-up etc. The people on the ward were brilliant. Sometimes I would bake for them. We always tried to make it an occasion.” For her last session, they decided to throw a unicorn party and raise some money for charity: “We had an idea of going in wearing unicorn pyjamas. A local tea room made a fabulous unicorn cake and we created a mini afternoon tea in the chemo suite. It was a thank-you for the nurses but also a chance to dress up and be whimsical. We raised £2,000 for Breast Cancer Now. It was a nice way to finish chemo.”

Lottie had been told that her lobular breast cancer would not respond to the chemo – instead, chemo was used to mop up any rogue cells in her body before surgery. She had a surprise in store, however, when another MRI revealed that her tumour had actually shrunk. “My oncologist couldn’t believe it. I somehow knew it had shrunk but he didn’t think that would happen. Yet the scan revealed that it had pretty much gone. The feeling was amazing.”

Lottie still had a long journey ahead of her, however. Genetic tests revealed that she had the BRCA2 gene – a gene mutation that results in a much higher risk of developing breast or ovarian cancer. Suddenly the surgery options she faced were very different from a lumpectomy. Yet knowing the full extent of her diagnosis was a turning point for Lottie, who resolved not to let breast cancer have the upper hand.

“I was advised to have a left mastectomy and then to have my right breast removed too at a later date.” Lottie’s husband and her best friend were with her. “My decision took two seconds. I looked at my friend and she said ‘I know what you are choosing and I support that.’ I told them I wanted both breasts removed. I wasn’t someone who could go home with just one breast. I also knew that my BRCA2 diagnosis meant an 87% chance of recurrence.”

Lottie’s double mastectomy was successful but she had to return to hospital regularly to have her wounds drained. Because she needed radiotherapy, which can affect the elasticity of the skin and therefore the type of procedure, she was told she would have to wait until the following summer for reconstructive surgery. “I was hacked off about that – I was a G cup and I was thinking ‘how am I going to go on?’ But actually it gave me more time to think – I wasn’t completely sure I even wanted it.”

Her BRCA2 diagnosis meant that she would also need a hysterectomy although, understandably sick of hospital appointments and feeling unwell, she decided to wait several months before the procedure.

Lottie’s weight had fluctuated during her chemotherapy, which affected her options when it came to reconstruction: “I had lost a lot of weight since chemo, but that actually went against me. My surgeon told me I didn’t have enough tummy fat for a tram flap, and I can’t have implants because I’ve had radiotherapy. But I didn’t want a lat flap because of what I do for a living. I was just coming round to the idea of reconstruction and to be faced with so many limitations was devastating.”

Lottie is a successful watercolour artist who specialises in wildlife and botanical subjects. She has more than 11,000 followers on Instagram and an online shop. A lat flap procedure, which takes skin, fat, blood vessels and muscle from the upper back to form a new breast shape, could compromise the strength in her back and affect her ability to paint. Yet Lottie’s surgeon advised that this was the most viable option.

“She told me she could perform a lat flap anytime I wanted – despite the fluctuations in my body weight and BMI – and she explained how it could affect me. I said I was willing to risk it.”

A walk on the wild side

Lottie needed time to think, so she decided to postpone reconstruction for the time being. This wasn’t just because of how it could impact her work. She also wanted time away from endless treatment and recovery cycles. And she wanted to wild swim.

“I’ve always loved wild or cold water swimming – in waterfalls, rivers, lakes – I’m somehow drawn to them. But when I was diagnosed and had my mastectomy I thought I wouldn’t be able to do it anymore. Getting changed at the beach or by a waterfall wouldn’t feel comfortable.”

Lottie still continues to enjoy wild water swimming
Lottie’s determination won through, however. “I began looking at mastectomy swimsuits online and I ordered one. Then I got ‘knitted knockers’ with stuffing – they’re lightweight breast forms knitted by volunteers. You don’t get the same shape with them but you don’t feel you are being weighed down.”

She went to the Yorkshire coast for a winter break and swam in the North Sea, and has since swum off the coast of Orkney where the outside temperature was just 5 degrees. “I don’t know what comes over me – I just have to get into the water. My husband sees that look on my face and he knows I’m going to do it.”
“True wild swimming is when you’re in the middle of nowhere. Every single time I go, I see a kingfisher. There are usually thousands of minnows surrounding you, and sometimes you feel an eel swimming around your legs.”

Lottie wears a tankini from Amoena when she wild swims – “It’s easier to get on and off than a one-piece and feels really comfortable” – but if she’s on her own she will swim naked. “I plan to do that at some point before my reconstruction next year,” she says. “It feels really nice.”

A cancer diagnosis at just 33 years old is devastating, but to go on to have a double mastectomy and hysterectomy means digging deep into your reserves of inner strength. Lottie admits she shut down her emotions initially and didn’t open up to her medical team for some time. But she gradually built an important bond with them.

“My advice to other women in my position is to trust your cancer team. You might have to work your ass off to do it – after all, it’s not your choice to spend time with these people having these gruelling procedures. And they don’t butter you up. I’ve learnt that’s what it’s like in the cancer world – they are very clear-cut. So if you are told something bad, trust them. But that works both ways – if you are told something good, you can trust that too.”

Lottie took care over her appearance throughout her chemotherapy. “I got heavily into make-up during chemo and I’d advise others to go with what you’ve got: pencil in your eyebrows, wear a wig – and get a really good one. Shave your hair off one last time after chemo ends, too. It’s tempting to try and hold onto new hair growth, but it really helps to start afresh. I have so much hair now and it’s incredibly curly where it used to be straight.

“I have struggled with feeling feminine, but it’s really important to keep liking yourself. Buy things that make you feel good. When you are younger and you are still active in so many ways, you can’t let your sense of femininity and sensuality die down.” This includes wearing lovely lingerie. Lottie discovered Amoena when someone who follows her on Instagram bought her an Amoena bra. “It’s great to realise you can still wear nice underwear. I particularly love their camisole bras.”

Lottie’s oncologist and her breast surgeon have now told her she is cured. “None of them have said I’m in remission. They view me as cured. I had no lymph node involvement and no spread. All my scans are clear,” she says. “My breast surgeon said she could see me living to be an old lady.”
She still can’t help thinking how breast cancer has changed her life. “We won’t be able to have a family now, for example, but I can’t change that so there’s no point in talking about it. I try to compartmentalise it.

“I will always be in the care of my medical team because I carry the BRCA2 gene, but I don’t feel it makes a difference, because I have done everything I can to keep cancer away. So I think of myself as one of the fortunate ones.”

Lottie is passionate about reminding younger women of the importance of checking their breasts and following up on any concerns. But she’s also the perfect role model when it comes to staying active and grabbing every chance to express yourself. “I seize any moment to swim, whatever the temperature and wherever I am. Despite what life throws at you, you can still enjoy life and do the things you love.”

Selected For You
Why a compression bra is better than a sports bra after breast surgery
How medical compression bras support healing
Read More
The Amoena Solution - For Everything in Breast Care
We are proud to support women throughout their journey – from the moment they are diagnosed, to living life to the fullest once more.
Read More
Introducing Balance Adapt Air: Inflatable Bra Insert
Balance Adapt Air is our most innovative shaper yet. Perfect if you’ve struggled to find the right fit, or your breast volume tends to fluctuate, it’s designed with an air chamber inside that makes it easy to adjust the shaper to meet your needs.
Read More
Amoena4Life Registration