A fresh how-to for living more mindfully every day

People who are trying to alleviate stress—and who isn’t, these days?—often turn to practicing mindfulness, also known as living in the moment. Mindfulness, the current buzzword in self-help literature and positive psychology, can certainly help with anxiety and stress, but its merits aren’t limited to stress relief alone.

“Mindfulness is basically about being aware of what’s happening in one’s present experience, with acceptance,” says Robert Siegel, Psy.D., Assistant Clinical Professor of Psychology at Harvard Medical School and author of The Mindfulness Solution: Everyday Practices for Everyday Problems. “It’s really an attitude toward experience.”

That recipe sounds pretty simple: pay attention to your own life. It isn’t until you sit down and try to practice mindfulness, though, that you see how difficult it can be. In fact, says Siegel, when we try, we realize that we’re living in “a narrative thought stream about some imaginary past that we call memories or some imaginary future.” We’re so caught up thinking about our past and future that we rarely stop to taste our food, smell the spring morning air, or even truly listen to our friends in conversation. “

It turns out that almost everything that distresses us has to do with these thoughts about the past and the future,” Siegel explains. This is particularly true for a cancer patient or survivor who worries about what she might have done to cause or deserve the cancer (chances are, nothing) and whether it might recur.

Sometimes it isn’t very obvious when we’re living mindlessly, says Laura Porter, Ph.D., clinical psychologist in the Department of Psychiatry and Behavioral Sciences/Medical Psychology at Duke University Medical Center. “We’ve all had the experience of driving somewhere in your car, somewhere you go all the time, and when you get there, you have no recollection of how you got there.” We are so caught up in our thoughts – our plans, self-criticism, imagined conversations – that we miss much of what is going on around us, she explains.

Practicing mindfulness can train your brain to stop ruminating and focus on the moment. In the way that someone who hits the gym regularly is better able to spring across the street if the need arises, practicing mindfulness allows you to tap into those mental muscles when stress, anxiety, or depression hit.

By focusing on the here-and-now, we eliminate these fears and concerns for the past and future. We see that our experience changes moment to moment; something that is disturbing at ten o’clock may not be as much of a concern at ten minutes past. In this way, we become less tense – and we’re better able to surf the waves of pleasure and pain.

“By expanding your mindfulness, says Porter, “you notice and appreciate things – especially what is functioning well and feels good.”

You learn to be kinder to yourself, to forgive yourself even in the midst of difficult emotions, agrees Diana Winston, Director of Mindfulness Education at UCLA’s Mindfulness Awareness Research Center (MARC) and co-author of Fully Present: The Science, Art, and Practice of Mindfulness. “People who practice mindfulness over time show others more kindness,” she adds. “They wish others well and wish themselves well.”

Think about the toll stress takes on our bodies. While we’re rarely being threatened by the proverbial saber-tooth tiger, our bodies experience that same “fight or flight” response that speeds up our heartbeats and breathing and then lands in our shoulders or in the pits of our stomachs. Even though we’re not worried about preserving life and limb, and are probably only thinking about whether we are happy or sad, angry or relieved, or successful in whatever we’re doing, these stresses are physical.

Mindfulness has an opposite bodily effect, explains Winston. It reduces inflammation, which is connected to the rise of cancers, and can even affect the brain itself. That’s not to suggest that mindfulness can prevent cancer, but it certainly can help cope with the pain. “It teachers you to just be present with the pain, to soften around it, to learn to tolerate it,” says Winston. 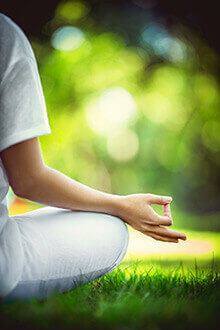 Often, when people think about mindfulness, about learning to live in the moment, they think about meditation. Meditation often stems from religious traditions, explains Siegel. “A movement toward ‘connection with others and less preoccupation with me’ is an important feature of most of the world’s religious traditions.” While meditation appears in most religions from Jewish to Christian to Muslim to Hindu, the Buddhist approach has probably been developed the most.

Whatever your religious background, though, one way to successfully cultivate mindfulness in your life is by starting small, practicing for five minutes a day, then gradually increasing the time to twenty minutes a day. Winston, who guides the Mindfulness Awareness Practice (MAP) at UCLA, says, “People report benefits within a few weeks” of training in this way.

…And Through Noticing New Things

“When you notice new things,” says Langer, “you come to see that information is context dependent. In other words, things look different from different perspectives. The more you notice about things that you thought you knew, the more you become aware of everything that you didn’t notice,” Langer adds. And that uncertainty becomes the rule rather than the exception. Which, in turn, leads us to be in the present, to be mindful.

“Forty years or so of research shows that the very simple process of noticing new things is literally and figuratively enlivening,” says Langer. “We give people instructions to notice new things – and they live longer and their health improves.”

The catch is that this process requires shifting the way you look at the world – in essence, continually looking at the world through new eyes. “Nothing is permanent, everything is changing and everything looks different from different perspectives,” says Langer. “We tend to hold it still with our minds even though it’s actually changing. So what we want to do is acknowledge the changes – and look for the changes.”

For instance, rather than operating on autopilot when you go food shopping, look around the store. The products might be slightly different than last week. Or they might be organized in another way than they were. There might be different staff members and even the people shopping alongside you are probably not the same neighbors you saw there the previous week.

Try these tips (adapted from lifehacker.com and zenhabits.net):

And you can return to these simple tools whenever necessary, adds Winston. “You can really be mindful when you’re walking down the street, when you’re eating, or even when you’re about to go into a meeting and are feeling really stressed.” It can help you feel more relaxed and be more effective at the dais.

Langer did a fascinating study with breast cancer survivors. She compared people who saw their cancer as ‘in remission’ with those who considered their cancer ‘cured.’

“If you have a cold and then you get rid of the cold, you don’t say your cold is in remission,” she explains. You say it is cured. “And if you get another cold, it is seen as a brand new cold.” It is possible, Langer suggests, to view cancer survivorship in the same way. “If the cancer goes away and an oncologist tells you that your cancer is in remission then, based on the work we’ve done, people feel as though the cancer is always lurking and can come out at any time,” she notes. And this stress, if we give in to it, can have a negative effect.

This approach separates the mind from the body. “People get so scared when they get a diagnosis of cancer that many give up,” says Langer. Giving up is never helpful in fighting adversity. “When you get this dread diagnosis, the mind is overwhelmed with stress, with the fear of negative things and a lot of giving up.” And that isn’t exactly good for you. “We don’t know how much of what happens when one is dealing with cancer is a function of the cancer or a function of the giving up.”

Instead of surrendering to the diagnosis, Langer advocates mind-body unity. “If the mind is in a healthy place, the body is going to be healthier,” says Langer. The group of women who considered their cancer ‘cured’ reported better general health, more energy, less pain, and less depression than the ones who thought it was ‘in remission’ and still lurking in their bodies. “Eighteen months later, the women who saw their breast cancer as ‘cured’ were happier and healthier on all the measures that we took,” says Langer.

So, what can we do to bring a more mindful approach into our lives?

The first step, says Langer, is to actively engage the world around you. “Whether it will remove the cancer or not is an empirical question.” Just focus on what is going on – the ever-changing sights, sounds, smells in your environment.

“None of us knows how long we’re going to live. The important thing is to make each moment matter,” says Langer. And if every moment in your life matters – then your life itself matters.

Mindfulness, says Langer, isn’t about specific exercise regimens – though some yoga programs do promote mindfulness – or about particular diets or medical protocols. It is about acceptance, opening our minds, focusing on the present moment, and gaining control over our lives. And it is about enhancing our joy and appreciation.

Guide Yourself to Mindfulness

There are Downloadable Meditations available online at:

This article was previously published in our Amoena Life magazine, the latest copy of which can be read online here.

To make sure you hear about our new releases as soon as they're available, sign up for our e-newsletter.