No Room For Vanity

Michele Torres is a Model Survivor

Professional model, TV presenter and voiceover artist Michele Torres is probably heard by millions of people every day. But her recent cancer experiences have given her a different story to tell. 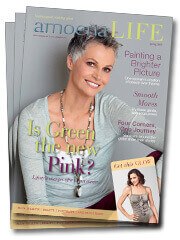 Cover model for the spring 2013 issue of Amoena Life, Michele Torres is beautiful, talented and successful—to an outsider, she would seem blessed indeed. And yet when tragedy struck her family in 2009, Michele was forced to reassess her life and rebuild it from the foundations up. Diagnosed with aggressive breast cancer just two weeks after losing her dearly beloved youngest brother to a brain tumor, she was suddenly catapulted into a kind of “no-man’s-land” where her beauty and talent no longer mattered: “When cancer strikes, you don’t know who you are,” she says. “You have to recreate yourself.” She lost weight; she lost her hair and could not rely on her looks to earn her living. But Michele’s resilience allowed her to come back from cancer with renewed optimism and zest for life.

Michele, 51, is one of four children, born and raised outside Los Angeles in Ontario, California. Her parents are still happily married after 57 years and she describes her family as “very tight knit.” By her own admission, she had an amazing childhood - she attended the world-renowned UCLA but did not graduate from there: “I partied too hard to really focus on my studies. My parents always said I took the scenic route through life, whereas my brothers and sister were more studious. That’s about right!” 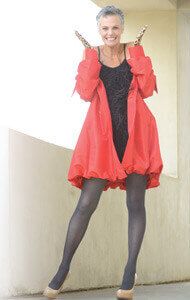 Michele had been modelling part-time while at UCLA. “Ever since I was about seven years old and saw my first fashion magazine, I’d wanted to be a model,” she says. And while she eventually gained not just one degree, but several, including a Masters in Psychology and Sociology, it was to the advertising world that she was drawn when she started full-time work. Luckily for Michele, this small agency was very hands-on, which meant that she was not just expected to write scripts for TV and radio ads, but to record them herself “It brought together my modelling and my creativity, teaching me how to be in front of a camera and how to use my voice.”

In what would still seem to be a charmed existence, Michele slipped easily into a full-time modelling, acting and television career. Her voiceover work fulfilled a very early ambition: “When I was little I used to dial up the speaking clock and just listen to the female announcer telling the time of day,” she recalls. “I was fascinated by it.” 40 years later, Michele is now the voice of AT&T telephone services and several other automated telephone systems, in both English and Spanish.

But in 2009, her whole existence was turned upside down. “My baby brother, Jon, was diagnosed with an inoperable brain tumor. It was such a shock. He fought it for 16 months and died, aged just 46, in October 2010.” She dropped everything and joined the rest of the family in nursing Jon, even trying to ignore a scare of her own when she found a hard lump in her left breast. “I knew it wasn’t right - I went for a scan and biopsy, and I got the results just two weeks after Jon had died. It was grade three breast cancer.”

Still grieving for her brother, Michele was catapulted into treatment - a bilateral mastectomy, chemotherapy and radiotherapy: “I told my doctor I wanted him to take both breasts. I didn’t want to be ever worried about breast cancer again. I looked at it as a way of starting over.”

Having breast cancer meant Michele found out more about herself than she ever knew before: “I had become used to a fabulous life - I was living the dream. But cancer is a great leveller. To have bits of myself taken away was shocking. I felt as though my whole identity was gone.”

Her survival instinct fortified by a determination not to let her parents bury another child, Michele knew she would find her feet, although she confesses that re-orienting herself was very challenging at first: “When you’re going through treatment, you cope by simply not having expectations about anything - you are flat. The self that you had known is gone and you have a new ‘normal.’ I describe it to friends like a crazy roller coaster ride - normally you would get on at point ‘A’ and eventually get dropped off there again. With cancer, you get on the ride and it’s fast and winding and it goes upside down and turns your stomach inside out, and you get dropped off way over there - it’s like you started in London and are dropped off in Munich. You don’t speak the language and you don’t know how you got there. When your treatments are over you are supposed to be normal again, but you don’t know who you are. You have to recreate yourself. And I don’t think there are a lot of programs out there to help you deal with that.”

Committed to keeping her career going, Michele focused on voiceover work once she could no longer be in front of the camera: “I have a studio in my house, so when I felt strong enough, I could still work as a voiceover artist.” But when her hair started growing back, she discovered a whole new look. “I think my modelling days would have been over had I not gone in a different direction. But I decided to keep my hair short and grey, and I entered a nationwide modelling contest for mature models. I was chosen first runner-up out of 7,000 entrants. It opened up an amazing new strand to my career.”

The Wilhelmina Models 2012 Over 30 Model Search was a very high profile contest, run by one of the world’s most prestigious model agencies. As first runner-up, Michele felt she had been given a second chance. “Cancer wasn’t what I had planned - it was what I was given. I decided to go with it, and this was the result. Now I have contracts with various different agencies - I am a novelty model. I always get applause when I do runway shows, because of my hair. I did have reconstruction but I have no nipples, and my breasts do not look normal. But you can’t wear a bra or prosthesis when you do runway shows, so I just let it be. I figure somewhere in the audience there may be a woman who needs to see this.” 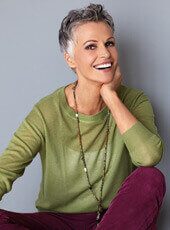 By simply being herself, Michele has become an ambassador for breast cancer survivors. “I figure maybe it’s my job, in some small way. Sometimes people wait around after the show, wanting to talk to me. And backstage, some girls look at my chest when I am changing. I always say, ‘Don’t be afraid - this is what a double mastectomy looks like.’ I think I help to make it normal. It’s also a way of saying, ‘I am a model and I am not perfect. Nobody is perfect - it’s not something to be ashamed of.’”

Michele’s new look also helped her to win a modelling contract with Amoena - a fitting coincidence, since she already loved their clothes. “They wanted a breast-operated model,” she explained. “I got the call from my agent and I remember rushing upstairs and putting on my Amoena camisole - a much-worn top that had been my saviour during the early days after my mastectomy. I took a photo of myself in that camisole and sent it to my agent, who sent it on to Amoena. I got the job there and then.” Michele went on to model for Amoena’s 2013-14 product catalogs, as well as appearing in Amoena Life magazine. 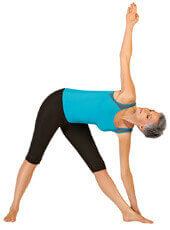 Michele is now looking forward to wearing the new Amoena Active collection in an exciting project she’s developing, to help other women who have been through breast cancer get back to full health again. “I want to find a personal trainer who specializes in working with breast cancer survivors, and together we’re going to make a video blog,” she explains. “We’ll approach it holistically - diet, nutrition, exercise and the spiritual side of recovery. And it will be ‘no holds barred’ - I will show them my bare chest, I want to be open and honest and let everybody see.”

Summing up the attitude that has informed her entire approach to life, Michele says: “I don’t take myself too seriously - I can’t. I’ve gone from having what many people would consider to be ‘everything’ to losing my entire identity. It is a very humbling experience.” She refuses to tell people what to do, emphasizing that everybody’s journey is their own, but stresses that reaching out to others was key to her recovery: “I made the most of all the help my friends and neighbors offered. Nobody is a ‘no-need woman.’ If you ever thought that about yourself, think again. I let go of control and I let people love me. It’s what got me through.”