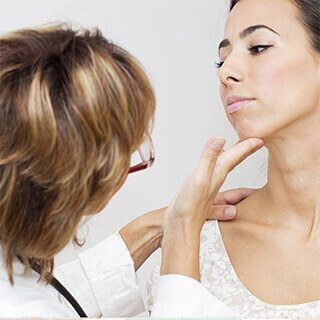 To understand what lymphedema is, it helps to know that the word is derived from a combination of the words “lymph” and “edema.” “Lymph,” also known as lymphatic fluid, is the mostly clear fluid that carries white blood cells through your lymphatic system. You probably already know that your circulatory system is an intricate system of blood vessels made up of arteries, veins, and capillaries designed to circulate blood to all areas of your body. In the same sense, your lymphatic system is a network of vessels and nodes that allows lymphatic fluid to interact with body tissues and the bloodstream, providing the lymphocytes that are a keystone of your immune system. “Edema” is the medical term for swelling anywhere in the body that is caused by a buildup of fluids. Therefore, “lymphedema” is, literally, a buildup of lymph that causes swelling in the body.

"Though there is currently no cure for lymphedema, it can be controlled through treatment if detected early."

To clearly understand what happens in lymphedema, it helps to think of the lymphatic system as a series of very busy roads that effectively route traffic only when all roads are open. Then, think of what would happen if some of these roads were closed, removed or otherwise became impassable while the level of traffic stayed the same. Lymphedema occurs when lymphatic fluid can no longer travel effectively through a segment of the lymphatic system and instead spreads into the surrounding tissues, causing swelling.

During surgery for breast cancer, it is almost certain that one or more lymph “nodes” and lymph vessels will be removed to determine if and how far the breast cancer has spread. This removal causes routing problems for lymph in the affected area. To further complicate matters, breast cancer patients are also frequently treated with radiation, which causes scarring and other damage to lymph nodes and vessels. In both cases, the injury caused to the lymphatic system places breast cancer patients at increased risk for lymphedema.

In some breast cancer patients, lymphedema develops almost immediately after surgery. In others, it may develop many years later or not at all. It is not possible to predict who will and who won’t face this disorder, but it is estimated that between one quarter and one third of all breast cancer survivors will eventually be affected.

Though there is currently no cure for lymphedema, it can be controlled through treatment if detected early, and there are steps that can be taken that may lessen the risk of developing lymphedema in the first place. Breast cancer survivors should familiarize themselves with the symptoms of lymphedema, and learn the tips that may help to prevent it altogether.

The Content on this page was reviewed for accuracy by a Certified Lymphedema Therapist.