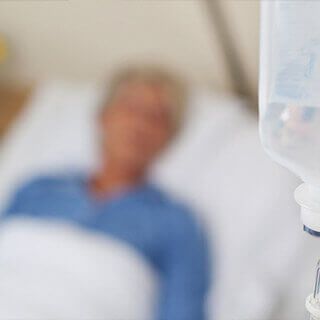 Chemotherapy is the treatment of cancer with drugs that can destroy cancer cells. These drugs often are called "anticancer" drugs.

How Does Chemotherapy Work?

Normal cells grow and die in a controlled way. When cancer occurs, cells in the body that are not normal keep dividing and forming more cells without control. Anticancer drugs destroy cancer cells by stopping them from growing or multiplying. Healthy cells can also be harmed, especially those that divide quickly. Harm to healthy cells is what causes side effects. These cells usually repair themselves after chemotherapy.

Because some drugs work better together than alone, often two or more drugs are given at the same time. This is called combination chemotherapy. Other types of drugs may be used to treat your cancer. These may include certain drugs that can block the effect of your body's hormones. Or doctors may use biological therapy, which is treatment with substances that boost the body's own immune system against cancer. Your body usually makes these substances in small amounts to fight cancer and other diseases. These substances can be made in the laboratory and given to patients to destroy cancer cells or change the way the body reacts to a tumor. They may also help the body repair or make new cells destroyed by chemotherapy.

"Chemotherapy is the treatment of cancer with drugs that can destroy cancer cells."

What Can Chemotherapy Do?

Depending on the type of cancer and how advanced it is, chemotherapy can be used for different goals:

Is Chemotherapy Used With Other Treatments?

Sometimes chemotherapy is the only treatment a patient receives. More often, however, chemotherapy is used in addition to surgery, radiation therapy, and/or biological therapy to:

Which Drugs Are Given?

Adapted from the National Cancer Institute's web site brochure, "Chemotherapy and You: A Guide to Self-Help During Cancer Treatment." (www.nci.nih.gov).