The Emperor of All Maladies: A Biography of Cancer 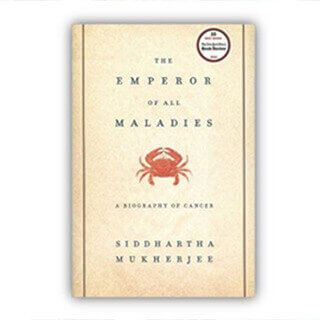 Although this Pulitzer Prize winning book has been available since November of 2010, its recent transformation into a three-part documentary film by the renowned Ken Burns has pushed this amazing work back into our collective consciousness. Both the book and the documentary are a welcome addition to helping the lay person better comprehend what is (and isn’t) known about this dreaded disease.

Although most of us who have had breast cancer are familiar with the one in eight statistics, author Dr Siddhartha Mukherjee (a medical oncologist) shares an even more alarming fact: In the United States, one in three women and one in two men will develop cancer in their lifetime.

Thankfully he felt compelled to try to unravel some of the mystery, as well as hopeful developments in a way that is both readable and educational.

In 1600 B.C., the first case of probable breast cancer was documented. In the thousands of years since, the Greek word, 'onkos', meaning mass or burden, has become the disease of our time. Cancer. The book’s title stems from a quote attributed to a 19th century physician Dr. Mukherjee found inscribed in a library book: "cancer is the emperor of all maladies, the king of our terrors."

Dr Mukherjee discusses cancer in the context of patients, which makes this not only a profound work, but sometimes profoundly difficult to read, especially when dealing with adolescent cancer patients. The reader often wishes this could be a work of fiction, but quickly realizes it is because of the stories of patients who have gone before us, who have dealt most intimately with one form of cancer or another, that the science is able to move forward.

Among the many stories and examples given is that of Dr. William Stewart Halsted, who performed what is believed to be the first radical mastectomy (including not only the breast, but the pectoralis major and pectoralis minor as well as lymph nodes of the axilla) in 1882. Until the mid-1970s, approximately 90% of the women being treated for breast cancer underwent this procedure. The norm at that time was for a woman with a breast lump to undergo anesthesia and not know until she woke up whether she would have a breast (or breasts).

Science was yet to show that the cancer had often already spread to distant organs or parts of the body, so the belief was that if you removed as much tissue and muscle as possible, it would stop the spread of the disease. Sadly, many women undergoing this disfiguring surgery still perished. Again, this is where observing patients moved the science forward.

Another fascinating story Dr. Mukherjee shares is the beginning in 1947 of the study of ALL (Acute Lymphocytic Leukemia) by pathologist, Dr. Sidney Farber. Dr. Farber decided to change his focus and start caring for patients. He was given a medication to trial for ALL, and though most of his patients died, some survived to remission. This changed the dynamic and with the help of philanthropists, Mary Lasker, and Charles E. Dana, he was able to open one of the first clinics specializing in cancer care and research, The Dana Farber Cancer Center.

Although The Emperor of All Maladies is filled with the science and history behind the fight against cancer, it also provides a thoughtful look at illness, medical ethics, and the highly complex and intertwined lives of doctors and their patients. Dr. Mukherjee's compassion for all involved is evident, (from the patient, to the family and their medical team, even to the researchers), which makes this difficult subject much easier to contemplate and comprehend.

Mukherjee sums it up succinctly when he shares: “In the folklore of science, there is the often-told story of the moment of discovery: the quickening of the pulse, the spectral luminosity of ordinary facts, the overheated, standstill second when observations crystallize and fall together into patterns, like pieces of a kaleidoscope. The apple drops from the tree. The man jumps up from a bathtub; the slippery equation balances itself.

But there is another moment of discovery—its antithesis—that is rarely recorded: the discovery of failure. It is a moment that a scientist often encounters alone. A patient’s CT scan shows a relapsed lymphoma. A cell once killed by a drug begins to grow back. A child returns to the NCI with a headache.” So, yes, cancer is still the emperor of all maladies.

Siddhartha Mukherjee is a cancer physician and researcher. He is an assistant professor of medicine at Columbia University and a staff cancer physician at the CU/NYU Presbyterian Hospital. A former Rhodes scholar, he graduated from Stanford University, University of Oxford (where he received a PhD studying cancer-causing viruses) and from Harvard Medical School. His laboratory focuses on discovering new cancer drugs using innovative biological methods. Mukherjee trained in cancer medicine at the Dana Farber Cancer Institute of Harvard Medical School and was on the staff at the Massachusetts General Hospital.

(April 22, 2015) Note: The Ken Burn’s PBS documentary is currently available for viewing online, which is a great companion piece to this book: (http://video.pbs.org/program/story-cancer-emperor-all-maladies/)