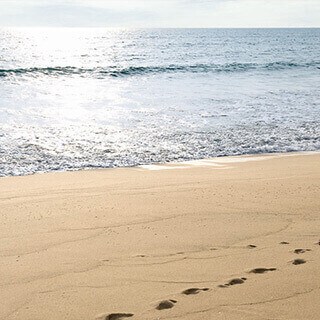 When Rebecca Pine was diagnosed with breast cancer in June of 2009, she was just 33. Although it would be a stretch to call it good fortune, Rebecca was no stranger to this disease. And while no one is ever prepared to hear the words, you have breast cancer, she already knew at some point in her life the possibility was very real. She’d actually had a baseline mammogram when she was 31 because her mother had been diagnosed at age 42 and had been found to have the BRCA mutation.

Her first mammogram results were fine, but at her next screening a year and a half later, there were lots of irregular calcifications, so she was sent for more imaging and then asked to undergo a stereotactic core needle biopsy. “The radiologist who performed the biopsy said he would call me in a week with the results,” says Pine. “A week went by and I hadn't heard from him, so I was telling myself that everything must be fine. I called the doctor two days later, and he said that it was cancer. It was surreal. The day I met with the breast surgeon to discuss the biopsy results I also learned I was BRCA-1 positive.”

She continues, “I had five ‘second’ opinions, and every one said that I should have a double mastectomy and then remove my ovaries. I had several other biopsies, on other areas of my breast, and on my unaffected breast; all came back clear. It was hard to imagine that a mastectomy was necessary (let alone two). My original biopsy found only DCIS, but the pathology from my mastectomy showed two invasive tumors as well. These were too deep and too small to have been felt, and hadn't been visible on imaging. If I hadn't had the more aggressive surgery, I wouldn't have known about the invasive cancer. I feel truly blessed on so many levels. I feel lucky that the DCIS was picked up on the first biopsy, and that I was urged to have the mastectomy. I know many women who were not so lucky, women whose cancer was not caught early.”

Rebecca’s diagnosis occurred just a month before her wedding. Although she’d been a single mother for 10 years, she had recently met a wonderful divorced father with two children of his own. So not only did she and her husband have to navigate the blending of a new five-person family, they were also faced with the realities of her surgery and recovery (which we’re happy to note, they came through with flying colors).

She recalls, “As I sought medical advice and began preparing for a mastectomy, I found that I was actually quite emotionally, albeit somewhat unexpectedly, attached to my breast. I had never felt that a woman needed breasts to be a woman. It wasn’t that I feared I would be less feminine, and my husband was extremely supportive in every way. My fear was about feeling less whole, less complete with a part of my body missing. I would have felt the same way, I am sure, had I been required to say goodbye to my arm or my foot. But this would be a different kind of loss, a more private one. One that would be hidden in the curves of reconstruction or a breast-like prosthesis, that those around me would not notice or even know about unless they were told.

”As an avid nature lover, I have always sought solace in quiet, wooded places when I needed time and space to ponder things. I found myself newly transplanted into the hustle and bustle of Long Island, where my husband and new children lived. Nature trails were crowded and strewn with trash. I knew no one outside of our family. With a household of five to manage, there was little time to meet the other mothers that I saw as they rushed by. And so I turned to the sea. It was there beside the roar of the ocean that I found the stillness I needed inside. Being at the sea was extremely cathartic for me. I watched how the waves had the ability to transform things. Bits of shells and pebbles were worn smooth over time. Even shards of trash, like broken bottles, became beautiful when churned in the folds of the sea.”

It was in this peaceful state-of-mind and calm setting that the seeds of The Breast and the Sea Project were formed. According to Rebecca, “The Breast and the Sea project has been incredibly healing for me. I feel like we (the photographer Miana Jun and I) are making a difference in the lives of the women who are a part of the project, and will ultimately make a difference in the lives of women going through breast cancer who read the stories and view the images of the positive, courageous women we are working with.”

For the moment, The Breast and The Sea Project is in the process of gathering stories that will eventually become a book. You can find out more about this labor of love by visiting her blog site: http://breastandthesea.wordpress.com/.

Rebecca also invites women who have lost one or both breasts to become involved with the Facebook community: Breast Cancer Survivors: Stories of Strength, Beauty, and Hope.

Since breast cancer, Rebecca’s life has, for the most part, been blessed. She knows she is blessed not only to have a three-year-old daughter, but to be able to stay home with her. Pine says, “Every day is such a gift. She is so full of joy and wonder. She is my little sunshine. I love being a mother and watching my children grow. Our older three are teenagers now.”

Unfortunately, Rebecca’s mother passed away when her daughter was just five months old (not from breast cancer). She feels this loss more acutely than that of her breasts, saying, “We were very close. Mom was my dearest friend. I'm grateful that she lived long enough to know and love all four of her grandchildren. But I miss her terribly. Until my mother's death, losing my breasts had been my most difficult loss. But losing my mother was far more painful.”

We are grateful to women like Rebecca Pine who gently teach us how to take the rough edges we experience  with breast cancer, and smooth them out by sharing our stories, thereby creating something of great and authentic beauty.