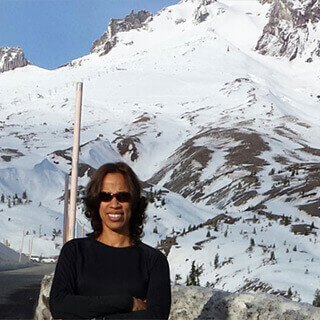 Bettricia (Trish) Otto had the childhood nearly anyone would envy, growing up in Bermuda with its gentle ocean breezes, crystal clear Atlantic waters, and the ability to be outside and active nearly 24/7. A quintessential tomboy, Trish reveled in her lush surroundings, and as a result has spent her entire life pursuing health and fitness, not as part of some momentary fad or craze – but as a way of life.

Running has always been a passion for Trish, but when she was diagnosed with breast cancer in September of 2011, she faced a truth she couldn’t run away from -- and many of her beliefs about physical fitness and disease were sorely tested. How could anyone who had spent her life being in good shape get breast cancer?

According to Trish, “I’ve had lumpy breasts my whole life. When I was a teenager I had some lumps and was concerned, so the doctor sent me to a surgeon who told me they were cysts and would eventually dissolve. The closest and only relative I know about who has had breast cancer was an aunt, so back in 2009, since I was still dealing with lumps and bumps, my OB/GYN decided I should have a baseline mammogram. While I wasn’t the least bit worried about getting breast cancer, I also felt it was a good idea to pay attention. I remember my regular physician questioning why I had done this because she didn’t feel it was necessary.”

While on an apartment and school scouting trip with husband Dan and daughter Ariel -- preparing for their relocation from Marshfield, Wisconsin to Portland, Oregon -- Trish discovered a lump in her right breast. “I mentioned it to my husband, so he said I needed to get it checked out when we got back to Wisconsin. By the time we were actually back there, I had completely forgotten about it. When Dan asked me if I’d had it checked out, I realized I hadn’t and finally got in touch with my OB/GYN.”

Otto continues, “She couldn’t feel anything when she was examining the breast, but she thought it would be a good idea to have a mammogram. They couldn’t see anything on the mammogram, but an ultrasound would provide one more tool just to be on the safe side. The ultrasound led to a biopsy and on the Friday before Labor Day in 2011 I got the call. I still wish they could have waited until after the holiday, because as I’m sure any woman who has been diagnosed can tell you, the waiting is one of the most difficult parts!

“I’m a podiatrist, so I knew a lot of people working at the clinic in Wisconsin. The first person I called was actually the radiologist and he told me to talk to a surgical oncologist. I also spoke to a friend who is a plastic surgeon so we could talk about lumpectomy vs. removing one breast vs. a bilateral mastectomy. My friend told me I had an aggressive form of breast cancer, so if I had a bilateral mastectomy we would have a clean slate to work with, and if there was no lymph node involvement I wouldn’t have to have radiation. My husband was in the room when I announced I wanted to go ahead and have the bilateral. I remember looking at him and seeing him shaking his head yes, because he knows me SO well. He absolutely knows how psychotic I am and how I would have spent time obsessing otherwise!”

Although a follow-up MRI showed no evidence of the cancer (it appeared everything was aspirated during the biopsy), Trish went ahead with her surgery. All she says she initially remembered (or cared to hear) was there was no lymph node involvement and they got clean margins. That was music to her ears. Although she initially had to endure a total of three surgeries (she kept developing hematomas), she just kept remembering the good news about the lymph nodes and the margins. She is glad she hadn’t opted to do her reconstruction at the same time, because she’s convinced the hematomas would have proven even more of a problem had she done so.

“The oncologist was so freaked out about the hematomas he sent me to a hematologist to see if I had some type of clotting disorder and that ended up being negative, but I was wiped out physically and couldn’t get off the couch for a couple of days. They talked about giving me a transfusion, but I ended up getting something called Venofer, which is an iron sucrose drip, and that worked wonders! Some of the research now is showing that people who are long distance runners can be iron deficient, so that may explain why I was having the problem. I was just glad when it got resolved.”

Trish and her family had made the move to Portland when she began her chemotherapy which ran from October of 2011 until January of 2012. She shares, “I ran all the way through my chemo and I really think that helped me to not only keep my energy level up, but to feel as normal as possible. I actually tried to stay fairly active even right after the mastectomy, because I knew it would help me endure.”

Like anyone who has faced a life-threatening and life-altering diagnosis, Trish admits to having her moments of abject fear. “I would wake up in the middle of the night and freak out, feeling like, 'Oh my goodness what caused this?' My daughter was only four at the time of my diagnosis, so I kept worrying that I wouldn’t live to see her grow up, or be there for her as she was growing up. I had a lot of sleepless nights and was pretty much in constant fear. I do think some of this had to do with the medications and the steroids.”

Trish does feel that being a physician was helpful, and she is also grateful that what she has been through has assisted her to better understand what patients are experiencing. “Now, although my medical specialty has nothing to do with cancer, I have a lot of patients come to me from oncology just to talk. They are so amazed how I can identify with what they are experiencing. It has also made a world of difference in treating my own patients. I have a much better understanding of what it’s like to have multiple doctor’s appointments and treatments. And I have to admit, sometimes I get a bit annoyed when I hear people who complain and there is nothing wrong with them. I get more frustrated than I did beforehand because I can’t help thinking, anyone in oncology would love to have your prognosis!”

Trish confesses to sort of ripping her life apart in an attempt to decipher why she got breast cancer. “In my work, I use a C-Arm which is a medical imaging device based on X-ray technology, so I’ve wondered about that. The cancer was in my right breast, and when I was younger I had a shoulder problem where I had multiple X-rays on that side, so I’ve also thought about if that contributed. You could drive yourself nuts trying to figure it out, so I attempt to stay in the moment and just do what I can to remain healthy. I do eat more organic foods to make sure I’m not getting pesticides, and I don’t eat much packaged food, which if nothing else, makes me feel a bit more in control.”

“I was very, very active before breast cancer,” says Trish, “To the point of doing a half marathon every month, so although being active is definitely important and I believe it does go a long way to keep us healthy, I still ended up testing triple negative. I guess what I’m trying to say is, don’t beat yourself up or blame yourself for your disease, because it really doesn’t play by the rules.”

To move past her breast cancer diagnosis and find ways to quell the fear and depression Trish sometimes found she was dealing with, she got involved with the Fred Hutchinson Cancer Research Center’s CLIMB to Fight Breast Cancer® and she believes this has been pivotal in her recovery.

Through this program. Trish has already or soon will tackle the likes of Mt. Rainier, Mt. Hood, and Mt. St. Helens. One of her climbing partners, Lynn, just happens to be a 71-years-young three-time survivor. Although Lynn is dealing with a metastases to her bones (which is currently in remission) Trish says she would be hard pressed to think of anyone who is more alive and fit. Says Trish, “She is absolutely phenomenal. I’m an adrenaline monkey, but Lynn has been doing this since she was in her 20s, so she’s pretty amazing!”

To prepare for her mountain climbing excursions, Trish does a lot of hill and long distance running. And while she admits to actually suffering from a fear of heights, she fully understands how facing your fears and overcoming them adds a fullness to our lives it’s hard to get in any other way.

“Because of my fear of heights,” says Otto, “The climbing has been nearly as much of a challenge for me mentally as physically. There were places on our practice climbs (Mt. Hood to the base of the mountain) where the slope was so steep I about had a heart attack the first couple of times I had to walk through it.  Afterwards I was fine, so now I can walk on that side of the slope and my mind says it’s not a big deal.

“I’ve even been caught in a blizzard on Mt. St. Helen where I got the worst sunburn of my life from the sun’s reflection on the snow, and where ice shards were cutting into me and the visibility was nil. Lynn was climbing with me at the time and asked if I wanted to turn around, and I said no. It was at this point when she told me if you can go through chemo, you can climb this mountain!”

Trish fully realizes that not every breast cancer survivor is going to share the need (or desire) to climb a mountain, but she does feel that when you are faced with something that seems insurmountable and are feeling overwhelmed, just thinking about what is meaningful in your life, whether it’s your family, your goals, your dreams for the future, or just trying to overcome your fears – if you can make that your focus, breast cancer loses some of its power.

In musing over this survivor’s story and spirit, it seems more than just a bit appropriate to feel that Trish Otto has actually found a way to make molehills out of both mountains and breast cancer!

If you would like more information about the CLIMB to Fight Breast Cancer®, please visit the Get Involved page on their website.