Single Dose Rads as Effective as Daily Treatment for Some Women? 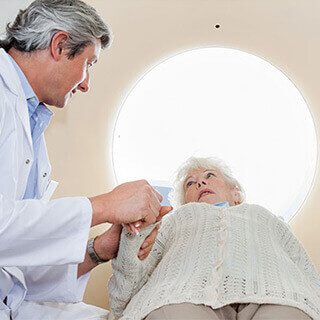 A single dose of targeted radiation during breast-conservation surgery may be as effective as up to six weeks of daily post-operative radiation treatments, according to initial results from an ongoing study. The goal is to pinpoint the tissues surrounding the excised tumor where 90 percent of recurrences have been found to take place.

The study examined a procedure known as TARGIT (targeted intraoperative radiation therapy) in which a lower dose of radiation is delivered directly into the breast where the tumor has been removed and while the woman is still under anesthesia. The single dose lasts approximately 25 to 30 minutes as opposed to the higher doses, shorter timeframes, and numerous sessions of conventional radiation.

Half of the 2,200 women enrolled in the study were randomly assigned to receive the intraoperative TARGIT procedure and half received conventional radiation therapy. After an average of four years of follow up, six of the 996 patients who received the intraoperative therapy and five of the 1,025 who received the conventional therapy saw a recurrence of tumors. That translated to a recurrence rate of 1.2 percent in the TARGIT group and 0.95 percent in the conventional therapy group.

However, according to Dr. Henry Mark Kuerer of M.D. Anderson Cancer Center in Houston, TX., "It is way too early to draw solid conclusions in order to safely recommend targeted intraoperative radiotherapy to any group of patients based on these immature data."

Dr. Bruce G. Haffty, chairman of radiation oncology at the Robert Wood Johnson Medical School in New Jersey, agrees. "The follow-up isn’t as long as you’d like it to be." He said cancer can recur after four years and a large dose of radiation can cause tissue damage that might not show up for three to 10 years.

As an added note, the women in the study were 45 years or older, had early invasive breast cancer and were considered appropriate candidates for breast conserving surgery.

The study was led by researchers at University College London and University of Western Australia at Perth and presented on June 5, 2010 at the annual meeting of the American Society of Clinical Oncology.

Read more on the topic from the LA Times and ABCnews.com.