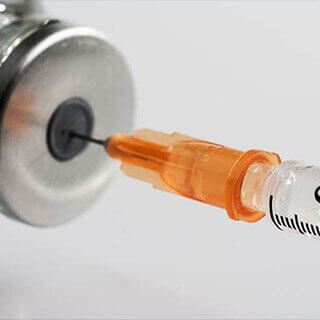 The new PANVAC vaccine has been shown to help the body attack cancer cells, improving overall survival time and even stopping the disease for some breast cancer patients.

A small study of 26 women with advanced ovarian and breast cancer were given the vaccine through monthly shots, and its effect enabled the body’s immune system to recognize and fight proteins produced specifically by cancer cells. All of the women’s cancers had first been treated with other therapies, and all had spread to other organs despite these treatments.

Of the women studied, four found their disease stopped progressing for several months after the vaccine, while one woman experienced the complete disappearance of her cancer.

“No matter now small the study is – and early studies will be small – when we have positive results on a particular technique, it’s a very hopeful thing. These are our most difficult patients to treat; they have failed multiple therapies,” said Dr. Elizabeth Poynor, a gynecologic oncologist and pelvic surgeon at Lenox Hill Hospital in New York City. She was not involved in the study.

Researchers felt that success may have been even greater had the women’s immune systems not been suppressed by the other failed treatments. “I’d like to eventually see the vaccine used earlier in the disease process before other toxic drugs…can damage the immune system,” said Dr. James Gulley, director and deputy chief of the clinical trials group at the Laboratory of Tumor Immunology and Biology at the U.S. National Cancer Institute. “Until recently we haven’t seen a lot of substantial clinical impact of vaccines…I think this gives us a better level of confidence.”

The complete PANVAC study is published in the November 8 edition of Clinical Cancer Research. Additional information about the PANVAC vaccine can be found through ABC News.

December 30, 2011
Find us on Facebook
Join us on Facebook and stay up to date with Amoena news, views and products, plus daily updates on the topics that matter most.
Join Us