This is a question I've asked myself time and again over the last 6 weeks. Initially as I contemplated signing up to do a jump, and then afterwards as the realization of what I was about to do hit home.

The answer is actually quite simple. I wouldn’t even contemplate doing this for just anyone, that’s for sure. The only reason I would do it would be to raise a significant amount of money for the charity that helped me the most through my breast cancer journey. To be perfectly honest, the sum of money would never be enough. But doing something that pushes me way beyond my comfort zone aptly demonstrates, I think, my level of gratitude and hopefully will raise a lot of money in the process, ensuring that the charity (Wessex Cancer Trust) can continue to help others like me, struggling to come to terms with life during and after cancer treatment. Breast cancer support groups, I learned, are truly an important resource.

In signing up for the jump I never imagined what it would be like. How could I? If anything, I tried not to think about it in the run up to the event because whenever I did my palms started to sweat. As time went on and I told more people what I was going to do they inevitably asked me “Why!?” (given my fear of heights, or rather, falling from a great height). All I knew was that the work the charity did was of paramount importance to me and would be to countless others too, so I just wanted to help them to continue to do that. The surgeons may have saved my life but Wessex Cancer Trust had given me a life worth living, and I wanted to live it, to the full. 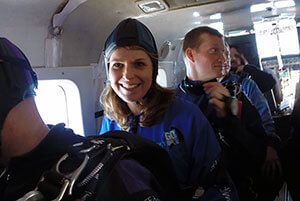 Surprisingly, the night before the jump I slept really well. Perhaps because the thought of jumping out of a plane was too great for my brain to comprehend but perhaps also because the weather forecast for the next day was not good, at all.

It rained heavily all morning with no signs of clearing up and as people started to reschedule their jumps I decided to do the same. From the comfort of a local pub my friends and I ate lunch and watched the rain, and then, the clouds parted to reveal the most beautiful autumnal blue sky. The conditions were suddenly picture perfect. I decided to go back to the airfield and see if I could get the jump in. I was too late, or so it seemed, the scheduled drops which had been postponed were being pushed through 2 hours later and my slot had gone. My friends and I were invited to wait and see if anything could be done to fit me in, so we waited. An hour or so later just when I had resigned myself to the fact that it wasn’t going to happen, my name was called out and I was next up. Reality hit home. I suddenly felt sick and was regretting having lunch so soon but there was no way out now.

My parachute buddy, Jay, was great. He calmly talked me through what was going to happen at every stage and really put my mind at ease. He introduced me to the lady who would be filming my jump – Olga, who took me to one side for a quick pre-jump interview. My stomach was really starting to turn at this point and as she interviewed me I suddenly realized that my nerves were starting to get the better of me – I had started to fiddle with my harness and had unknowingly undone one of the ties! Luckily I had only unraveled a length of excess cord that had been neatly tucked in so as not to flap around and nothing more. 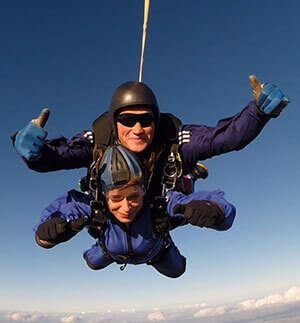