Open your Mind to the Benefits of Tai Chi 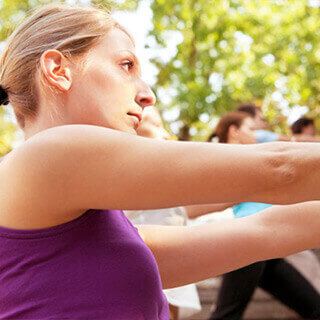 Women dealing with breast cancer, whether they are currently in treatment, recovering from surgery or seeking a form of exercise that will enable them to regain strength and range of motion, have long known that yoga can be a gentle and effective way to accomplish these goals. However, the types of surgeries women with breast cancer are often required to have, with the added possibility of chemotherapy and radiation, can make even yoga poses more demanding than is physically possible at various stages of recovery. For women facing this dilemma (or simply looking for another type of gentle exercise) Tai Chi can provide a great solution.

Tai Chi is often described as “meditation in motion” since this gentle exercise keeps the body constantly moving by combining slow, graceful movements with both meditation and breathing techniques. In today’s world, Tai Chi is considered a form of exercise, but its roots are believed to have originated in 12th-century China where it originated as a martial art.

The techniques used in contemporary Tai Chi address the body and mind as an interconnected system.  Possible benefits include not only enhanced mental clarity and physical health, but improved posture, balance, flexibility and strength.

During this low-impact, slow-motion exercise, participants go without pausing through a series of motions most often named for animal actions. For instance, in a movement called Grasp Sparrow's Tail, the left hand is held at chin level as though grasping the head of the bird, the right hand placed to the side of the hip as though smoothing the bird's tail. In this case, the bird is a symbol of consciousness, air, spirit and breath.

Other movements that call to mind Tai Chi’s martial arts background can have names like Box Tiger’s Ears, which includes turns and kicks.

Tai Chi differs from other types of exercise in several respects. The movements are usually circular and never forced, the muscles are relaxed rather than tensed, the joints are not fully extended or bent, and connective tissues are not stretched. What this means is that Tai Chi can be easily adapted for just about anyone, from the very fit, to someone confined to a wheelchair or, as in the case of a breast cancer survivor, recovering from surgery or treatments.

Tai Chi has shown the potential to improve quality of life and the physical ability to carry out normal daily activities in women suffering from breast cancer or the side effects of breast cancer treatment. In a 2008 study at the University of Rochester, published in Medicine and Sport Science, researchers discovered that quality of life and functional capacity (including aerobic capacity, muscular strength and flexibility) improved in women with breast cancer who did 12 weeks of Tai Chi, while declining in a control group that received only supportive therapy.

Additionally, it has been shown to provide benefits in several other medical conditions (many of which women with breast cancer may also possess) that include:

The benefits of mind-body exercise

Lorenzo Cohen, Ph.D., a professor in the Departments of General Oncology and Behavioral Science at The University of Texas MD Anderson Cancer Center, explains that Tai Chi shares numerous physical benefits long attributed to yoga, which include:

Additionally, Tai Chi has been found to reduce the risk of falls for elderly people. And some research has shown that Tai Chi can bolster the immune system while decreasing the production of stress hormones like cortisol, epinephrine, and norepinephrine.

Dr. Cohen feels that chronic stress can affect us on a cellular level, saying, “Chronic stress causes our sympathetic nervous system to go into constant overdrive. With typical physical activity or exercise, a quieting of the mind does not happen. Practicing Tai Chi can dampen the sympathetic nervous system and calm the mind, thus helping to reduce your stress level.”

When deciding what type of mind-body practice is best for you, Dr. Cohen suggests choosing whatever fits into your lifestyle. “Ask yourself which practice you will do on a daily basis,” he says. “After six to eight weeks of daily practice, you will begin to see physical improvements in your flexibility, your sleeping patterns, and your physical energy. It takes about six months of daily practice to see the inner transformation that brings about a pervasive calmness, self-awareness, and an open heart.”

Exactly what should you expect from a typical Tai Chi class?

As with any exercise, your experience will vary depending upon your instructor, your current health status, and the setting. Tai Chi can be practiced indoors or out, so in climates or seasons where the weather permits, it’s not uncommon to see people practicing these graceful movements at a park or on a beach. Comfortable clothing is always suggested, so an outfit that allows for easy movement is all that is required. A t-shirt and loose fitting or knit pants are just fine. The old “built for comfort, not for speed” most certainly applies here.

Forms: A form can include between 20 and 100 movements, so depending upon which form you are doing, it can take up to 20 minutes to perform all of the movements in that form.

Breathing: Since breathing and paying attention to the breath is a key component of Tai Chi, as you perform the movements, you will be asked to pay attention to your breathing, to make sure it is originating from the diaphragm. While breathing is natural to all of us, in today’s stressful world (and the added stresses associated with an illness) it’s not uncommon for people to actually take shallow (nearly panting) breaths without realizing it. Being mindful and paying attention to our breath can be a great first step in learning to calm the mind and body.

Many people enjoy participating in an actual class where they join a group of other enthusiasts. Tai Chi is one of those great practices that work equally well in a group setting or performed alone. Once you've worked with an instructor long enough to feel comfortable performing a variety of forms, one of the beauties of Tai Chi is just this versatility.

Here in the U.S., Tai Chi is currently not restricted by state or federal government regulations. This means teacher training program requirements can vary from 50 to 1,000 hours depending on the school. Since there is no licensing required, you will want to make sure the instructor you select is well versed in working with individuals who have health restrictions or concerns. Many hospitals and cancer centers offer Tai Chi classes, making the selection a bit less difficult. If you aren’t familiar with a qualified teacher, you should ask your doctor or nurse for recommendations.

Questions to ask a potential instructor:

Breathing and postures are easy, but stay safe

While Tai Chi is a low-impact exercise and is considered to be reasonably safe, it’s always a good idea to err on the side of caution, especially when you’ve just gone through (or are receiving) treatments for breast cancer. Here are a few things to keep in mind:

"A growing body of carefully conducted research is building a compelling case for Tai Chi as an adjunct to standard medical treatment for the prevention and rehabilitation of many conditions commonly associated with age," says Peter M. Wayne, assistant professor of medicine at Harvard Medical School and director of the Tai Chi and Mind-Body Research Program at Harvard Medical School's Osher Research Center.

Note: An adjunct therapy is one that's used together with primary medical treatments, either to address a disease itself or its primary symptoms, or, more generally, to improve a patient's functioning and quality of life.

For more information about both Tai Chi and the work Dr. Wayne is studying, you can go to www.treeoflifetaichi.com.
Find us on Facebook
Join us on Facebook and stay up to date with Amoena news, views and products, plus daily updates on the topics that matter most.
Join Us