Men Get Breast Cancer, Too 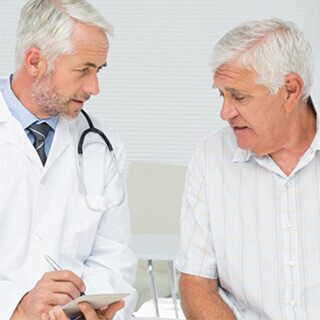 While most women who’ve had breast cancer know that men get breast cancer, too (quite often because once they’ve been diagnosed and begin researching the disease, they discover the statistics) –  many men have no idea they might be at risk.

Since male breast cancer accounts for less than 1% of all cases, it’s understandable that this health risk doesn’t make headlines, but every man (and the women in their lives) should definitely know both the risks and the indicators.

Although men at any age can develop breast cancer, it is most often detected when they are between 60 and 70. Until recently, women diagnosed with breast cancer have faced the stigma of having cancer in a body part that society feels uncomfortable discussing. For men, this societal stigma can be even more pronounced, since so many consider breast cancer a woman’s disease.

The American Cancer Society estimated that for breast cancer in men in the United States for 2014:

For men, the lifetime risk of being diagnosed with breast cancer is about 1 in 1,000 (as compared to 1 in 8 for their female counterparts).

It’s interesting to note that lobular carcinoma in situ (abnormal cells found in one of the lobes or sections of the breast), which sometimes occurs in women, has not been seen in men.

How can men recognize their risk factors?

Having a risk factor does not mean men will get cancer; but not having known risk factors doesn’t mean they are not at risk. It’s important for men to talk to their doctors, to determine whether or not breast cancer should be on their radar. Risk factors for breast cancer in men often include the following:

We are all genetically programmed, which means our cells carry the hereditary information that is received from our parents. It is known that hereditary breast cancer only makes up about 5% to 10% of all breast cancer, but knowing if you have a genetic component is important. Men who have a mutated gene related to breast cancer have an increased risk of this disease, so they obviously need to take this into consideration.

How to recognize breast cancer in men

What are some of the signs men should pay attention to when it comes to breast cancer? Some of the most common include:

It is important to note that these symptoms may also be signs of a benign (non-cancerous) breast condition.

Since men tend to have much less breast tissue than women, some of these signs can be easier to recognize in men than in women.

When a man notices any of the previously mentioned signs, what’s next?

Although breast cancer in men is much less common than in women, if something that feels out of the ordinary has been discovered, the testing is very similar to what women experience:

If cancer is found, additional tests will be done to study the cancer cells in order to determine what additional treatments are needed.

Because breast cancer in men is rare, there are few cases available to study. Most studies of men with breast cancer are very small, which means more study is needed.

Treatment for breast cancer in men

The treatments used to treat breast cancer in women are also routinely used when men have the disease:

The main treatment for breast cancer in men is surgery to remove the tumor. This is usually a mastectomy. Since men’s breasts are usually small, lumpectomy (also called breast conserving surgery) is rarely used. Some men may have radiation therapy following surgery, depending upon the stage of the breast cancer.

Tamoxifen is taken in pill form, every day for at least five years. Men who complete the full course have higher survival rates.

For men with hormone receptor-positive breast cancer, chemotherapy may be given before Tamoxifen therapy, depending on the stage of his cancer.

Men with HER2/neu-positive breast cancers may be treated with Trastuzumab (Herceptin) plus a chemotherapy containing a Taxane.

Fox News reported on male breast cancer in October of 2014, sharing the stories of several men with various stages of the disease. The report details the personal side of diagnosis. We also recommend these additional links for further information about when men get breast cancer :