Fit to be Tied: Scarves as Post-Surgery Solution 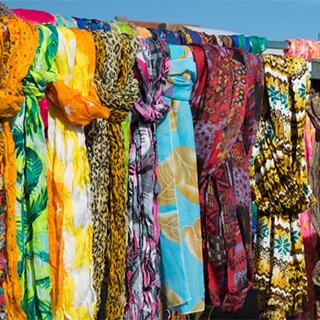 Since my bilateral mastectomy, I’ve had a lot of time on my hands. I wish I could say I’ve used it well. I seriously doubt that anyone would think grousing about my inability to take a shower or sleep in a position other than on my back qualifies as time well spent!

When I’m not engaged in the previously mentioned curmudgeonly mumblings, there have been long stretches where I’ve spent my time daydreaming about having magical powers so I could just tap a wand, wrinkle my nose or click my heels and be my old self again.

During this interim period, since I’m not quite ready for a fitting, I decided it would be a good idea to go through my wardrobe and figure out what will work and what won’t. This is no small task since prior to surgery I was faced with the same dilemma! At least now I have an excuse.

It won’t be earthshaking news for readers who also no longer have breasts, but one of my first post-surgery realizations was that scarves can hide any number of missing parts. Luckily, I only have two, but I’m just saying …

For some reason over the past few years I’ve managed to accumulate enough scarves to adorn a harem. (I have no idea where that reference came from, but I’m going to attribute it to weeks of diminished capacity and that fact that the Middle East has been in the news a lot lately!)

I have friends who wear scarves and look smashingly stylish. To date, whenever I attempt to sport a scarf as an accessory, I come off looking like I did when I played dress up as a child. You know, the concept is viable but I appear to be wearing something obviously meant for someone else.

My closet is filled with big scarves, little scarves, rectangular and square scarves, scarves with prints and scarves without. There are light scarves and dark scarves, summer scarves and winter scarves, even infinity scarves (where do they begin and end?)! In other words, anyone unable to find at least one scarf that works perfectly would be an anomaly.

Hello, my name is Dianne, and I’m an anomaly.

So, while spending endless hours recuperating, I made a plan: If nothing else, I was going to discover countless ways to tie and wear said scarves so that when I am once again fit as a fiddle, I can re-enter the world wearing a scarf and looking marvelous.

With just a few masterful mouse maneuvers online, I was inundated with ways to tie every scarf imaginable. I discovered everything from 25 Ways to Wear a Scarf in 4.5 Minutes (no, this does not require you try 25 looks in 4.5 minutes – they are talking about the length of the video, thank goodness); 15 Chic and Creative Ways to Tie a Scarf; even How to Tie a Silk Scarf – 18 Steps with Pictures. I’d been struggling to find a single way that served my needs and it appears anyone should be able to master a multitude of methods!

What I’ve discovered isn’t that I have a problem knowing how to tie a scarf, it’s that regardless of how many different types of knots, wraps or bows I create they all look pretty ridiculous on me.

Friends who sport scarves to hide a wrinkly neck (and look good) obviously have much longer necks than I do. Acquaintances that can double a scarf, wrap it around their neck and create a dramatic statement piece continue to amaze me, because when I attempt the same “look” I appear to be trapped like a pupa trying to emerge from its case.

Even elderly trendsetters who effortlessly manage to take a scarf and create a stylish turban have left me floundering. I tried to achieve this look and resembled the genie in an old black and white movie about Aladdin.

So it appears, unless I plan to spend the remainder of my years in front of a firing squad or playing pin the tail on the donkey, when it comes to finding a way to use my scarves, I still have my work cut out for me! And that’s knot funny!