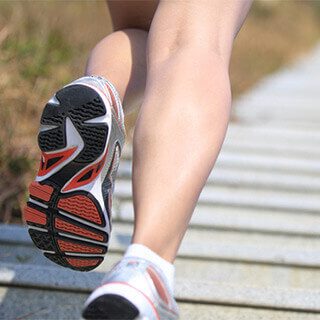 I tend to look for any excuse not to exercise, but time after time, I find it's the one thing that is beneficial for what ails me--including lymphedema. Exercise, in fact, is one of the best ways to ease the symptoms associated with lymphedema because it helps move extra lymphatic fluid out of your body.

Ironically, though, exercise can make matters worse if you overdo it. The key is determining the right amount of physical activity for you.

"Exercise is highly individualized for women who suffer from lymphedema-- what one woman may tolerate may affect another adversely," says Janie Smith, PT, CLT at Northside Hospital in Atlanta. "That's why it's imperative to pay attention to your body when you work out, and make sure you're not overextending yourself.

"Anytime you tire, hurt or pull a tendon or a muscle--causing any stress to the arm--the brain registers this as 'trauma' and sends fluid for healing," Smith explains. "That's why you need to know where to draw the line."

Determining the right amount of exercise can be tricky because to increase muscle mass, you have to tire the muscle, and this registers as trauma.

"If you feel tired or achy, or your arm starts swelling, then stop," she advises.

In the case of weight lifting, Smith advises less weight (starting with a few pounds) and increasing the number of reps.

"Two to three pounds is plenty of weight to build muscle strength and keep toned," she says.

Stretching exercises, such as yoga and tai chi, in particular, are great for managing lymphedema. "

"However, even certain yoga moves can be too intense," she cautions. "If you place too much body weight onto your arm, it may swell."

Aerobic exercise, such as walking, running, cycling and swimming, is also recommended for relieving lymphedema for two reasons. First, it gets the body in motion, whereby fluid is pushed out by the movement of joints and muscles. Second, exercise fosters deep breathing, which stimulates the diaphragm.

"The last point where lymphatic fluid is passed into the body is behind the diaphragm. Deep breathing causes the diaphragm to push against the thoracic duct, which in turn, pushes fluid into the blood stream," she says.

It's also extremely important to wear a compression sleeve (or a preventative sleeve if you're at risk) during exercise and up to 45 minutes after you finish your routine. The exception is swimming, since chlorine can ruin the compression sleeve. In that case, wear the sleeve before and after you swim.

Whatever exercise you choose--whether yoga or weight lifting or swimming--just be sure to exercise caution and good judgment so that your workouts will offer benefits rather than create more problems.

The Importance of Exercise for Long-Term Recovery

Just as regular exercise has significant health benefits for all of us, it can provide important benefits for breast cancer survivors.

A long-standing belief has been that cancer patients experiencing fatigue after chemotherapy and radiation treatment should rest, sleep and remain inactive. However, a growing number of researchers, including Dr. Kerry Courneya from the University of Alberta in Canada, have found that exercise after breast cancer treatment is not only safe for most patients but it may also improve chances for long-term survival.

Writing in the Journal of Clinical Oncology, Courneya reported that exercise results in improved overall quality of life, including cardiopulmonary benefits and even increased happiness and emotional well-being. “Happiness was a great outcome,” he wrote. “Many people would argue that a good sense of well-being will positively affect the chances of survival.”

He noted that a separate study found that an increase in exercise capacity after treatment was associated with a 12 percent improvement in survival.

Similarly, a study by researchers at the University of Buffalo found that ongoing physical activity after breast cancer treatment had a protective effect against breast cancer risk that could be measured decades after the initial diagnosis.

Writing in the journal Medicine & Science in Sports & Exercise, Joan M. Dorn, Ph.D. and colleagues reported that long-term physical activity has a favorable effect on hormone levels, body weight, weight gain with age, and immune function—all of which contribute to lower breast cancer risk. While the protective effect was apparent in all ages of women, it was most pronounced in women who reported high levels of physical activity at least 20 years prior to menopause.

Another study by researchers at the Fred Hutchinson Cancer Research Center in Seattle, Washington came to a similar conclusion. Dr. Anne McTiernan and colleagues found that a regular, moderate-intensity exercise program lowers levels of blood estrogens in postmenopausal women.

“We know that women still make estrogen after menopause, although they make it in their fat cells instead of in their ovaries. Women who have high blood-estrogen levels after menopause have a high risk of developing breast cancer. Therefore, it is important to find ways to lower estrogen levels for women who want to lower their risk of breast cancer,” wrote McTiernan. “This study gives us direct evidence that exercise can affect biology related to breast cancer in older women.”

She added that the beauty of exercise as a method to prevent breast cancer is that it can be done by most women at low cost and with low risk of side effects. In addition, exercise has many other health benefits. “The good news is that it is never too late to enjoy the health benefits of exercise,” she noted.

Finally, a study by researchers at the Yale School of Medicine found that women diagnosed with breast cancer are often less physically active in the weeks and months following their diagnosis—a factor which can have a negative impact on the long-term success of their treatment.

Writing in the journal Cancer, Melinda Irwin, Ph.D. and colleagues found that most women diagnosed with breast cancer exercised or engaged in physical activity an average of two hours a week less than before their diagnosis.

“Decreases in physical activity with a diagnosis of breast cancer may lead to increases in body weight and body fat,” they wrote. They speculate that because fat cells produce estrogens after a woman goes through menopause, weight gain after diagnosis may be associated with greater risk since estrogens stimulate breast cancer cells.

They recommend that physicians design treatment programs for breast cancer patients that include exercise and physical activity in addition to their medical treatment.