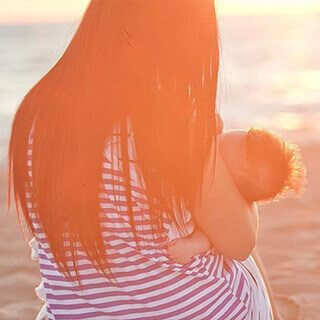 Pediatricians have a very good reason for recommending that women breastfeed as much as possible in a baby’s first year of life. In fact, there are several good reasons for both mother and baby. Breastfeeding strengthens an infant’s immunity, protects from developing certain diseases, boosts intelligence and enhances development. It also has advantages for Mom. Past research has shown that breastfeeding may reduce a woman’s risk of developing breast cancer. Now a new study by researchers at University of North Carolina at Chapel Hill School of Medicine suggests those benefits also extend to women who have a family history of the disease.

Researchers used data from a long-term study of more than 60,000 women who had at least one pregnancy in 1997, when their breastfeeding was assessed in detail, and then followed the women for eight years to determine how many of them developed invasive breast cancer. Women who had a mother or sister with breast cancer were 59 percent less likely to develop premenopausal breast cancer if they breastfed their children. In fact, breastfeeding was found to have the same risk-reducing affect as taking tamoxifen for five years. It didn’t seem to matter how long the women breastfed: risk reduction was the same whether they breastfed for three months or three years.

Breast cancer risk remained the same for women who did not have a family history of the disease. This might be because rates of breast cancer among these women were too low to be associated with a reduced risk, or because some genetic component of breast cancer is affected by breastfeeding.

The study results suggest that even women who have a family history of breast cancer can lower their risk simply by breastfeeding their children. Experts aren’t really sure how breastfeeding reduces risk, but they theorize that it may prevent post-birth inflammation that may increase the likelihood of breast cancer.