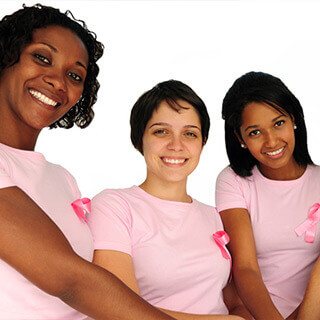 Billions of research dollars have been spent studying breast cancer in American women, yet we know little about racial and ethnic differences that may affect how the disease develops or should be treated.

Breast cancer is the most frequently diagnosed cancer among nearly every racial and ethnic group in America. A woman's chance of developing and dying from the disease varies depending on her ancestry. For years, socio-economic factors—less awareness, fewer mammograms, and lack of health care—were believed to be responsible for these differences. Now more specific research is showing that differences in ethnic biology may be the key to understanding why breast cancer incidence and rates of mortality differ.

The risk of developing breast cancer is highest among white women, but African American, Asian and Hispanic women in the U.S. have very different profiles for developing and surviving the disease.

When discovered, African American breast cancers tend to have a poorer prognosis than those of Caucasians. Tumors are usually more aggressive, are diagnosed at a later stage when treatment options are limited, and are three times as likely to be triple-negative—they are not fueled by estrogen, progesterone or the HER2neu protein and do not respond to current therapies that block or eliminate these hormones.

Although research often combines Asian Americans into a single category, the term includes many distinct ethnic groups from the Asian continent. Breast cancer affects these populations differently, depending on their individual ethnic backgrounds.

Breast cancer is less common among Asian American women than white women or African Americans, but it is the leading cancer among Chinese, Filipino, Japanese and Korean women. Because Asian women in the U.S. have mammograms less frequently than any other ethnic group, their tumors are more advanced when found, when treatment options are fewer and survival is less likely.

Foreign-born Asians have some of the lowest breast cancer rates in the world, but their risk increases quickly when they adopt a Western diet and lifestyle. Rates are increasing in Japan, for instance, and Asians who migrate to the U.S. or are born here have a risk similar to average American women. Chinese American and Japanese American women have higher rates of breast cancer compared to women of the same age in China and Japan.

A 2004 study of Asians in California—the state with the largest U.S. Asian population—found that Asian American women are less likely than women of other major ethnic groups to develop breast cancer, but have the fastest growing rate of breast cancer in the nation. While other unknown factors may be at play, this increased incidence is most likely due at least in part to risk factors inherent in our lifestyle.

Hispanics are the fastest-growing minority in the U.S., but we know little about the unique complexities of their breast cancers. Overall, their rates of breast cancer incidence and mortality are lower than Caucasian women. They are generally also less aware of their breast cancer risk than women of other ethnic groups and have less access to health care. Among ethnic groups in the U.S., only American Indians and Alaska Natives have less health insurance.

Women living in Mexico have traditionally had low breast cancer risk, but that is changing as more women are living in industrialized Mexican states. Breast cancer is also on the rise in Mexican American women. M.D. Anderson, Arizona Cancer Center and three universities in Mexico are now collaborating in the ELLA Binational Breast Cancer Study, a data gathering effort to provide insight and information about breast cancer differences between Mexican women in the U.S. and in Mexico. ELLA is already producing useful information, finding that U.S.-born Hispanic women have lifestyle and reproductive factors that increase their risk. They are more likely to begin menstruating before age 12, be obese, drink alcohol and use hormone replacement therapy. In contrast, Mexican-born women have more factors that decrease risk: they have more children, breastfeed for a longer period, are more active and consume more fiber.

Mexican-born Hispanics are less likely to have a family history of breast cancer than U.S.-born Hispanics, but when they do have a family history, they have twice the risk for developing triple-negative tumors and six times the risk for developing these very dangerous tumors at a young age. This is different than triple-negative breast cancers seen in African American women, which are not associated with a family history. It is not clear why these differences exist, but both genetics and environment seem to be involved.

The ELLA data also provides another indication why more early-stage tumors aren’t found in Hispanics: 67% of Mexican Americans with breast cancer found a lump or other breast abnormality on their own—that means the lumps were large enough to be felt—but almost half of them waited a month or more before seeking health care because they were either uninsured or couldn’t afford treatment. Only 38% of Hispanics age 40 and older have regular mammograms.

What we're learning is that breast cancer is not the same among all women. While socio-economic and cultural factors influence when and how a woman is diagnosed, unique ethnic biologic factors appear to determine tumor characteristics. A 2006 study by University of Southern California found that levels of natural estrogen in post-menopausal women vary by ethnicity and race, and may explain differences in breast cancer rates. Even small genetic differences and environmental backgrounds of ethnic populations may uniquely influence breast cancer risk. As more population-specific research is conducted, health experts may develop prevention and treatment strategies that differ by race.

Regardless of differences in biology, minority women are not using the health care system as much as they need. Greater effort is needed to respectfully penetrate cultural barriers to help women understand their risk, and the importance of routine screening and appropriate treatment. In some cultures, breast cancer and disease is a taboo topic never to be discussed, even among family. Many Hispanic and Asian women don't speak or understand English and don't trust the health care system. African American women often have deep feelings of guilt and embarrassment when diagnosed and are more likely to miss or delay treatment. Many Asian women believe developing cancer is a fate unaffected by behavior. Any or all of these issues may keep women from performing self-exams, having routine mammograms, or changing lifestyle factors that affect their breast cancer risk.