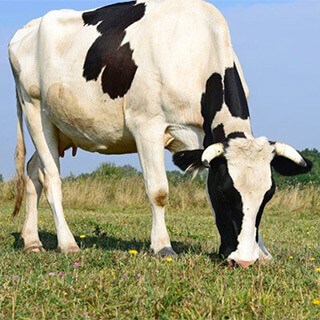 Researchers from the University of California, Berkeley say they have discovered that infections from the bovine leukemia virus (BLV) and breast cancer in humans may be linked.

The study, published in the journal PLOS ONE, examined breast tissue from 239 women, testing for the bovine leukemia virus and comparing samples from women with breast cancer and those who have no history of the disease. Based on their findings, 59 percent of samples from women with breast cancer tested positive for the bovine leukemia virus while 29 percent of samples from those without cancer showed exposure to the virus.

Lead author of the study, Gertrude Buehring, Ph.D., says the link between the bovine leukemia virus and breast cancer came as a surprise because it’s only been a year since the virus was confirmed to be transmittable to humans. She does stress that while their study showed an association between the virus and the cancer, it was not able to prove that the bovine leukemia virus actually causes breast cancer.

However, breast cancer incidence is highest in countries with the greatest consumption of milk and dairy products. Her research group has made several important discoveries about BLV that support its plausibility as a breast cancer virus: It infects the breast epithelium of cattle (it was previously thought to infect only lymphocytes); it is hormone responsive; and it inhibits DNA repair, which may be its mechanism of transforming cells from normal to malignant. Her group also established that 40 percent of humans have antibodies to BLV, and that BLV DNA is present in breast tissue and significantly associated with breast cancer.

“We still need to confirm that the infection with the virus happened before, not after, breast cancer developed, and if so, how,” says Dr. Buehring. She adds, “If BLV were proven to be a cause of breast cancer, it could change the way we currently look at breast cancer control. It could shift the emphasis to prevention of breast cancer, rather than trying to cure or control it after it has already occurred.”

A 2007 U.S. Department of Agriculture survey of bulk milk tanks found that 100 percent of dairy operations with large herds of 500 or more cows tested positive for BLV antibodies. This may not be surprising since milk from one infected cow is mixed in with others. Even dairy operations with small herds of fewer than 100 cows tested positive for BLV 83 percent of the time. When data for the current study was analyzed, it was revealed that carrying the bovine leukemia virus gives a person a ratio of 3:1 chance of having breast cancer, with odds higher than more commonly known risk factors like obesity and alcohol consumption.