Always In Style - The History of the Bra 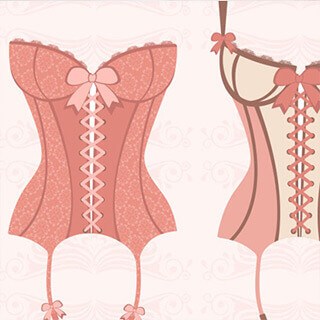 It can be sexy or simple, feminine or functional. It can enhance a cocktail dress and add ease to exercising. It's both coveted and cursed. While some women splurge on them, others purchase them only as a necessity. However it's viewed and used, the bra is a staple of most American women's daily wardrobe. And it's been part of women's lives, in one form or another, for over 4,000 years. The history of the bra is varied and even intriguing.

Bras (derived from the French word, brassiere, meaning "upper arm protector/support) first appeared around 2500 BC, when Minoan women on the Isle of Crete wore corset-looking garments that exposed, rather than covered, their breasts. As time passed, undergarments either augmented or disguised the breasts, depending on the culture.

While breasts were de-emphasized in the 13th and 14th centuries, they re-emerged in importance during the 15th Century, when Catherine de Medici, wife of King Henry the II of France, banned thick waists in the royal court. As a result, a torturous metal-and-whalebone contraption was invented that tightened the waist while supporting the breasts. It was called the corset, and remained in women's wardrobes for the next four hundred years.

In the U.S., breasts have experienced a similar pattern of emphasis and de-emphasis. In the early 1900s, the corset was used to accentuate the feminine "hourglass" form, which was highly regarded at the time. The bra as we know it today was invented in 1913 by New York socialite, Mary Phelps Jacob, when she fashioned two silk handkerchiefs and some ribbon since a corset wouldn't work under her figure-fitting, silky gown. She patented her creation in 1914, which Warner bought the next year;  the company began producing millions of bras for American women.

Even with the bra’s introduction, it took a world war for the corset to become obsolete. During World War I, the U.S. effort required metal. Some 28 tons of metal became available from discarded corsets. They were never used again.

During the Roaring Twenties, flappers chose boyish fashions, so Warner introduced a bra that created a flat-chested look. Later that decade, another major bra manufacturer, Maidenform, entered the marketplace, offering cup sizes and bras for all ages.

Then, big breasts came back in vogue in the 1930s, due primarily to buxom movie stars sporting the "sweater girl look." As a result, Warner produced a push-up bra with under-wires to achieve this "stiff," protruding effect.

Appearing well-endowed remained popular over the next couple of decades and bra sales reflected this trend. In 1959, Warner and Dupont introduced a stretchy fabric, called Lycra, which made bras lighter, more durable, more comfortable and more natural-looking.

But women didn't take advantage of this wonderful new material for long, as feminists in the 1960s tossed out (and burned) their bras to protest being viewed as "sex objects."

Social factors played into bras regaining a foothold in the late 1970s/early '80s, when aerobic classes and running became the rage. As women hit the streets and into the gym, they needed comfort and support for their bouncing breasts. The answer came with the Jogbra® in 1977.

And, let's not forget Madonna's contribution in the 1980s of bringing the bra to the forefront -- literally-- when she wore her intimate apparel outside her clothing, setting a trend among a new generation of young girls.

Bra sales further soared in the 1990s, when the Wonderbra gave average-sized women cleavage--a necessary component to the plunging necklines that were in style. Now, in 2007, based on celebrity photos and fashion trends, it appears that cleavage is here for a while.

Today's women have more options than ever in terms of style, color, pattern, texture, size and type of bras--including breast cancer patients, which hasn’t always been the case.

In the 1900s, mastectomy bras were designed more as a medical device than as part of the wardrobe. In the 60s mastectomy bras were similar in appearance to a regular bra but differed in that they included no underwires and contained stretch pockets on the inside to allow a breast prosthesis to be inserted and secured.

"Before breast forms became available, women of invention had to find solutions to symmetry,” says Lesley Pfitzenmayer, Textile Design Manager for Amoena. “I’ve heard stories of various home remedies for breast forms – everything from socks and oil-filled balloons to cotton balls and pantyhose. It’s hard to imagine the effect these had on self-confidence!”

For years, breast cancer patients had few choices in breast forms until Amoena introduced its Affinity/Discrene attachable systems in 1992. This was followed by Amonena's Luxa Contact attachable form system in 1998.

“Mastectomy bras have come a long way, as well, since the first designs,” says Pfitzenmayer. “Over the years, Amoena has developed feminine, sexy lingerie that features decorative lace, sumptuous fabrics, elegant elastics, flex-comfort underwires, and feminine trim. And, they keep getting better. For example, even its traditional cut-and-sewn fiberfill bra has been updated to include a foam inner layer. In addition, our seamless, molded bras are modern in design and provide the smoothest silhouette and very natural curves with support. We also have added touches of embroidery at the shoulder straps and offer matching panties for our bras.

“Fabrics have improved over the years as well. Now, there’s better support with a stronger spandex that still contains a feminine luster. And, our European Mona is made from the best two-way stretch fabric for the ultimate comfort and forgiving fit. This bra is the best to use for first fittings to test true symmetry of a breast form to the remaining side. We also developed Coolmax pockets for extra comfort, and introduced refined lace patterns that enable bras to lie flat and smooth under clothes.

This article was most recently updated in 2013.